In May myself and my boyfriend visited Finn Lough resort in Enniskillen for our one year anniversary. I first heard of Finn Lough towards the end of last year when they released their ‘bubble domes’. It seemed like every local blogger was talking about it and I had read some really good reviews. I shared it on facebook a few times and unbeknown to me my boyfriend actually tried to book it for my birthday in January, unfortunately it was fully booked so we decided to go in May instead which we figured would be a good idea based on the good old Northern Irish weather!

The build up to our trip was so exciting, I was following their instagram for months and was constantly checking for any new reviews as we really didn’t know what to expect. We couldn’t wait to get there and experience what it was like to sleep under the stars in one of the most unique (and glamorous) ways possible.

One thing to note is the price, now some might find it reasonable but personally I thought £175 bed and breakfast in a glorified tent was a tad steep. However, having since returned and looked on the site again, I can see prices can vary significantly and what we paid was on the lower end of the scale!

When we arrived on a VERY unseasonably warm Thursday in May we were greeted in reception by a really helpful woman who informed us that due to someone accidentally deflating the bubble dome earlier in the day, we wouldn’t be able to visit it just yet. Also, due to the intense heat, we were advised that it was best to wait until the dome cooled down before entering it. Finn lough said they had catered well for keeping the domes warm in winter but not really allowed for the hot temperatures we were getting and so although there is constant air flow in the dome, there is no way to keep them cool enough to be habitable once the sun is directly overhead and beaming in.

I have to say that Finn Lough handled this situation extremely well and apologised for the delay in getting us into our dome. We were whisked away on a golf buggy down to the lough side where there was a picnic table waiting for us with a beautiful traditional tartan picnic blanket complete with an ice bucket of prosecco and bottled water on the house. We were totally shocked and it definitely made our stay that more special and romantic as its something we wouldn’t have thought to do ourselves. And with such stunning weather , situated on the edge of the lough, totally secluded, it was bliss (and perfect for some selfies!). They asked if there was anything else they could get us and before we could answer they suggested some local crafts ciders/beers, soft drinks and a box of delicious brownies straight from their Finn Lough Kitchen. We were completely spoilt and it definitely made up for not getting into our bubble dome straight away. A few hours passed and we were picked up by the golf buggy and brought to our dome were everything was explained (so that we didn’t deflate it!) as well as how to control the heat/air flow.

We stood in amazement for a few minutes just taking it all in, it was amazing. Each dome is surrounded by a fence and trees with it’s own private path and gate. This is something almost everyone has asked since hearing about our trip and that is ‘could people not look in and see you’ and the answer is most definitely no! Imagine! Also to note, there is electricity and power sockets, a functioning toilet and shower so no need to worry on that front. However there is no TV or wifi so you will have to be sociable and speak to one another haha!

The bubble domes give you the effect of sleeping outside with all the comforts of a hotel room. This was my first experience of ‘glamping’ and I loved it. The bed was immensely comfortable and we each had a robe and slippers. Even the shower area has a clear mini dome so you can literally shower under the stars, there is nothing primitive about this accommodation! I have to say there is nothing quite like being woken up naturally by the sunlight and the sound of birds tweeting all around you. Surprisingly the sun didn’t wake us up at the crack of dawn and we slept soundly.

Would I stay in a bubble dome again? The answer is yes! Though I wouldn’t be rushing back straight away. It really is one of those one off novelty kind of trips, not something you would do regularly. Someday I would love to return, however having looked about the entire Finn Lough resort I see that there is a lot more to offer than just the domes and in fact I would love to return to stay in some of their other kinds of accommodation such as the lakeside lodges!

For more information on Finn Lough check out their social media or http://www.finnlough.com 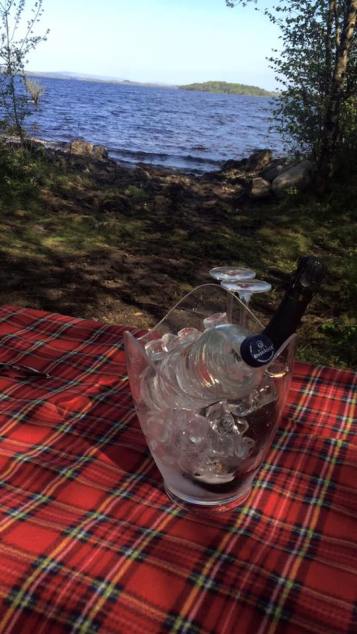